Half of a Yellow Sun audiobook does gentle justice to the 2006 novel
Chimamanda Ngozi Adichie’s novel of 1960s Nigeria is either overkill or overdue, you decide
11 years since Chimamanda Ngozi Adichie published Half of a Yellow Sun . A multi-faceted account of 1960s Nigeria, it effortlessly lived up to the anticipation created by her debut, Purple Hibiscus (2003). The hardback was supplemented with an audiobook read by Adjoa Adoh, who offered a master­class in tact and range. Such has been the novel’s success that one audiobook is apparently not enough.
Whether this is overdue or overkill depends on your opinion of the original. Zainab Jah’s voice is lighter than Adoh’s, and her pace a little gentler. She is every bit as good when shifting between characters, and mixing English with Igbo. Where she doesn’t match Adoh’s original is in rendering Adichie’s narrative voice. While she is smooth enough, she doesn’t quite have Adoh’s cool assurance.
With effortless grace, celebrated author Chimamanda Ngozi Adichie illuminates a seminal moment in modern African history: Biafra's impassioned struggle to establish an independent republic in Southeastern Nigeria during the late 1960s. We experience this tumultuous decade alongside five unforgettable characters: Ugwu, a 13-year-old houseboy who works for Odenigbo, a university professor full of revolutionary zeal; Olanna, the professor's beautiful young mistress who has abandoned her life in Lagos for a dusty town and her lover's charm; and Richard, a shy young Englishman infatuated with Olanna's willful twin sister, Kainene. Half of a Yellow Sun is a tremendously evocative novel of the promise, hope, and disappointment of the Biafran war.
The narration was amazing, Zainab Jah does a great job voicing over different characters.
And above all the author explains sights, experiences, smells and feelings as if you were there. Really enjoyed listening to the book and so far it has been the best book I read/listened to this year.

13
Half of a yellow sun - Chimamanda Ngozi Adichie 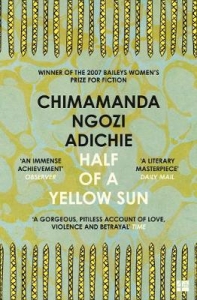