The Rosie Effect will not make much sense unless you read the first book The Rosie Project. The author did his best to get into the mind of a person affected by high functioning autism although I never got the impression that the character, Don, considered himself as being on the autism spectrum as he never identified himself as such but only claimed that he was wired differently. He seemed to be shocked and offended when compared to "RainMain" , the Dustin Hoffman movie's autistic character, by a minor character and even goes so far as to say that a world full of Rainman would be dysfunctional and a disaster, but a world full of people like him world be organized and efficient. I disagree on that point. His logic in thinking this is that he believes he can function without help, he has a job and is now married whereas Rainman is dependent, can't get a job and makes no contribution to society. Yet he ignores the fact that he has around him people to help him cope and filter and understand and help him maneuver through the world's conceived insanity. Without them he is almost unemployable himself and probably couldn't hold a job if it weren't for an understanding Dean who can look beyond his annoying quirkiness and set him up so that he can be successful in the academic setting. The Dean at Columbia even had to get him a special Visa in order for him to be able to get on a plane and has acquired him special privileges through security that even include the use of the airport lounge as well as other preferential treatment. Although in his mind, he thinks he deserves it because he gave the airport security on numerous occasions a discourse in mind numbing detail on all the security risks and how to make it more efficient. In truth, without the intercession of the Dean he would probably be put on the terrorist watch list and never allowed to fly again. As such I found that particular incite on Rainman's dependent state to be very shortsighted and a little on the condescending side. Especially since I happen to have a son that is more like Rainman and less like Don, the main character. He has difficulty communicating, tends to hyper focus on laundry ( which is a plus in my book, I hate doing laundry) but has a job, is learning to drive and is a valued member of our family. Who knows what Rainman could have done had he not been institutionalized and expected to do nothing but sit and watch tv. My son also has one thing that Don doesn't. He doesn't feel the need to learn to deceive and lie. Which unfortunately is what happens to Don. Don must learn empathy for his pregnant wife, make plans to solve everyone else's problems while his own marriage falls into the dumps and in the process learns to keep secrets and deceive her in order to keep her from being stressed. She in turn thinks he is disconnected with the baby and is concerned about his ability to bond and be the Father that she wants. But she has her own set of debilitating problems. He feels he can't talk to her about his plans for becoming the perfect husband and father because he takes everything she says literally when she says she doesn't want to talk about it. Then to make matters worse he has to lie and deceive her about all the mishaps he has gotten himself into with the law by innocently taking the advice of a live-in psychologist to study children by watching them on the playground (Apparently in New York that is illegal especially to video tape them if you are not at the park with another child under the age of 12.) He doesn't want to tell her or get her involved because he is afraid of raising her cortisol level due to stress and thus harming the baby, which he refers to as Bud (Baby under development). The rest of the book is just one bad decision after another by both main characters as they try to cope and overcome their own forms of disabling behaviors. That's not to say it isn't funny at times, it was just sad as a parent of a child with autism to see one that starts out honest and to the point, become entwined in a web of lies because that is more socially acceptable. For that purpose I think it is a good read. As children we start out innocent, then we learn to lie and put on our masks in order to make ourselves cool and fit in. I'm not sure when that begins but it is a shame that it has to happen especially when everyone touts just be yourself. Unless of course your are considered weird by the majority of people in the room. Then pretend your someone else.

In short it is a good book worth the read. On the side it is also very much on the nose when it discusses the problems of clinical studies and how biases contaminate them, but definitely read the The Rosie Project first or you won't appreciate the characters as much and you might get a little lost on who is who.

Reacties op: Filled with humor and plenty of heart, The Rosie Project is a delightful reminder that all of us, no matter how we’re wired, just want to fit in 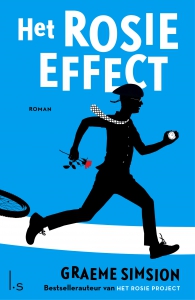