There is something fundamentally sad about the main character in John Williams’ 1965-novel Stoner. That sadness is partly why it is the greatest novel I’ve ever had the chance to read.
That is the premise of this novel. The plot. And I could sit here and explain to you the whole story. From beginning to end. And despite that, if you’d pick up the novel and read through it, I truly believe you’d be able to experience what I experienced when I read it. Because somehow, this book is not about what happens within it. There is something greater. Something I’ll never be able to grasp. It is a work of art. John Williams created, with this book, something special.
I personally believe it lies with the main character. There is something relatable to William Stoner. The fact that through all trouble and every sorrow, Stoner turns to his books. It is not a coincidence that the Penguin Vintage Classics-version of the novel has a stack of books on the cover. The book is about Stoners love for books.
But the way John Williams write does make it special. How he puts his words and sentences and paragraphs together screams of pure talent. And the boring intrigue and the failed marriage and the end that awaits us all flows from the page into our minds as it brings an immense sadness into our hearts. A sadness I’m quite certain the writer himself must have felt, in one form or another. At least that is what it does to me. That is how I feel.
Stoner is in no way John Williams’ only novel. How could it be? In 1942 he wrote Nothing but the night, in 1960 he wrote the novel Butcher’s Crossing, which in fact is a wonderful novel. in 1972, after the publication of Stoner, he even published an historical novel titled Augustus, telling the tale of Rome’s emperor. He also wrote poetry, which is no surprise when taking a look at the style of his writing.
But none of them seem to reach the level of Stoner. Apart from it I’ve only read Butcher’s Crossing, and although it has the same tone to it, and in all seriousness is a great read, it does not compare to the masterpiece we have been so lucky to rediscover. As a wannabe author I can only dream of one day reaching the level of John Williams, and there is no doubt that his beautiful novel deserves the title of a true American Classic. John Williams deserves to be mentioned with the likes of Ernest Hemingway, F. Scott Fitzgerald and Harper Lee.
I end this review as Williams ends his novel. Although there is no secret that William Stoner dies at the end of the novel, the way his death is written is close to magnificent. It is when he picks up the book he dreamt of writing, the dream me managed to fulfil, the only glimpse of light in a dark life, one last time.
¨He opened the book; and as he did so it became not his own. He let his fingers riffle through the pages and felt a tingling, as if those pages were alive. The tingling came through his fingers and coursed through his flesh and bone; he was minutely aware of it, and he waited until it contained him, until the old excitement that was like terror fixed him where he lay. The sunlight, passing his window, shone upon the page, and he could not see what was written there. The fingers loosened, and the book they had held moved slowly and then swiftly across the still body and fell into the silence of the room

Reacties op: He opened the book; and as he did so it became not his own. 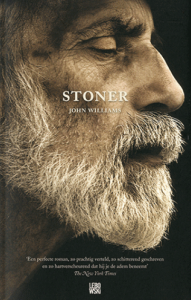