Black life in America has endured as little more than a fragile truth in the hands of white aggressors. And Tyson does well to remind us just how all-consuming racial terror can be when wielded with brute force: “Affronted white supremacy drove every blow

There are a number of facts to parse in this book — such as Till’s affinity for straw hats on churchgoing Sundays, and the sheriff’s belief that the body recovered from the river was part of an “N.A.A.C.P.-sponsored scheme” to disgrace Mississippi — but none perhaps more profoundly consequential than Bryant’s own admission to Tyson that the events that led to Till’s death didn’t happen as she had previously attested.

Outside private correspondence with her attorney, trial testimony and her unpublished memoir, Bryant remained tight-lipped about her interaction with Till. In 2008, in her only interview since that fateful season of death, Bryant admitted to Tyson that a crucial piece of her testimony in court was fabricated. Till never “grabbed her around the waist and uttered obscenities,” as she had avowed on the witness stand. “You tell these stories for so long that they seem true,” she confesses early in the book, “but that part is not true.” And so we are left with a sobering certainty, one that even Bryant herself is forced to concede to Tyson, more than 50 years later: “Nothing that boy did could ever justify what happened to him.”

The sum of history is made up of recurring patterns. Each new decade has brought past sins to the fore. From Emmett Till and Henry Marrow to Amadou Diallo, Rekia Boyd and Alton Sterling. These deaths, old-world lynchings that have taken new shapes, are simply the mores and modes of a long-practiced American custom: white supremacy.

Reacties op: It's a beautifully written book, and its importance can't be overstated.

2
The Blood of Emmett Till - Timothy B. Tyson 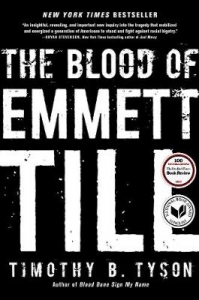