Unfortunately, the title, “The President Is Missing,” depends upon what the meaning of the word “is” is. After all, Duncan narrates most of this story himself, so we always know his whereabouts. And as we zoom through these chapters, it’s easy to tell which author is holding the reins. Sometimes, the pages spark to DEFCON 1 with spectacular shootouts, car crashes, Viper helicopters and a pregnant assassin code-named Bach who “is known only by her gender and the classical-music composer she favors.” I’m guessing that’s the handiwork of Patterson.

But for much of “The President Is Missing,” Patterson seems to have deferred to the First Writer. That’s a problem. When we pick up a thriller this silly, we want underwear models shooting Hellfire missiles from hang gliders; Clinton gives us Cabinet members questioning each other over Skype. President Duncan spends an awful lot of time consulting with world leaders, reminding us that “a safe and stable United States means a safe and stable Israel.” He lectures at us about the proper function of government and the responsibilities of NATO. Several segments read like little admonitions for Trump: “Surrounding yourself with sycophants and bootlickers is the shortest route to failure,” Duncan says. But unless someone reads those passages on Fox News, the current president is unlikely to encounter that wise advice, and the rest of us already know .There's plenty of intrigue and action to keep the reader turning pages. With the former president's knowledge of Washington politics and foreign policy, the storyline cuts a path through today's headlines. Of course, with the prose from Patterson, the suspense intensifies.

Reacties op: The plotting is immaculate... the writing is taut. 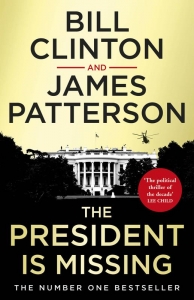