Now, all I can say is that there is a reason why Stepehn King is named one of the greatest writers of our time, and I can assure you that these claims are not at all misjudged..Stephen King’s The Shining is arguably his most renowned book, both due to the novel itself, and the 1980 filmic adaptation.
The novel reflects many of the themes originally established by the Gothic, but it goes further. Aside from the Overlook Hotel itself, there is no clear villain in this story: it’s about real people living their real lives. Sometimes, they are good, but sometimes they’re not so good, and this balance between good and evil that exists within all of us is what The Shining is really about.
I honestly could write hundreds of thousands of words talking about this book, but I won’t, because I have assignments that I should be writing, and you really don’t have the patience for that amount of words, so I’ll talk about some of the most interesting aspects of this novel: character development and streams of consciousness.

Character Development
Streams of Consciousness
The Shining offers us both, and does so pretty superbly. For most of the novel, we have the ‘terror’ drawing us in and creating what feels like a very real fear of the Overlook Hotel. Then it’s within these last one hundred pages that you really start to see the ‘horror’ coming out.

Reacties op: there is a reason why Stephen King is named one of the greatest writers of our time 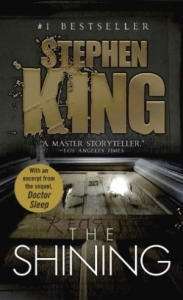