Told from Theo’s perspective, the story at first seems merely a timeline of a therapist’s attempts to bring a patient back to reality. Theo is ambitious, of course, and helping Alicia speak again would definitely be a coup to his career, but as the story progresses, it’s obvious there’s another reason behind his determination.

His narrative, interspersed with excerpts from Alicia’s journal and the flashbacks of his discovery of the infidelity of the wife he adores, chronicles his sessions with her and soon establishes how much the progression of their lives have in common, binding them together in other than a therapeutic relationship.

What begins as a mere mystery transforms into a thriller delving into the psyches of patient and therapist. In a final climactic chapter, it is shockingly shown how alike their shared experiences are. A caveat here: the revelatory chapter is written in such a way that to the unperceptive reader, it may seem a continuation of the one preceding, and thus may be somewhat confusing as to time-frame. The final sentence of the last chapter is open to interpretation.

A neatly woven, intelligently written story that lifts the curtain on the complexities of trauma and the human psyche

Reacties op: **TRIGGER WARNING ** The novel is set in a psychiatric hospital, 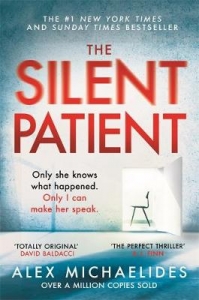