Atwood has given us a sequel, The Testaments. “Dear Readers,” she wrote recently on social media, Everything you’ve ever asked me about Gilead and its inner workings is the inspiration for this book. Well, almost everything! The other inspiration is the world we’ve been living in
In this brilliant sequel to The Handmaid's Tale, acclaimed author Margaret Atwood answers the questions that have tantalised readers for decades.
When the van door slammed on Offred’s future at the end of The Handmaid’s Tale, readers had no way of telling what lay ahead.
With The Testaments, the wait is over.
Margaret Atwood’s sequel picks up the story more than 15 years after Offred stepped into the unknown, with the explosive testaments of three female narrators from Gilead.
The Testaments is very well written (if you enjoy Atwood’s style of prose). It features three alternating narrators. 1. The infamous Aunt Lydia towards the end of her life as she reflects upon what she’s done in her career as the most powerful Aunt in Gilead’s history. 2. June/Offred’s daughter Agnes/Jemima (now a teenager about to be married off to a Commander) that was stolen from her when she and her husband tried to escape and raised by another family. 3. Daisy/Jade who is raised in Canada and entirely unaware the first 16 years of her life that she is actually the infamous baby Nicole that was smuggled out of Gilead thru the efforts of June, Nick, and Mayday.
Atwood uses these three narrators to weave three separate stories that eventually come together to answer the questions anyone had after reading The Handmaid’s Tale like “What happened to June?”, “Did June ever see her children again?”, “Who lit the match that set off the events leading to Gilead’s collapse?” etc. The strongest part of the book, where Atwood really shines, is her character Aunt Lydia’s reflections about her life choices. Is she good or bad? Is she a villain or savior? Were her motivations altruistic or selfish? Atwood makes Aunt Lydia’s personality enigmatic enough that the reader is left unsure at the end of the book. The only weak spot, in my opinion, is the idea that a teenage Nicole would’ve voluntarily gone back to Gilead undercover as a “convert” so readily after the death of her adoptive parents in Canada. I didn’t find that part very plausible.
Overall...if you loved The Handmaid’s Tale...you’ll love The Testament

These testimonies revealed so much more about the lengths we must go to survive. The Handmaid’s Tale was just a glimpse at the impact of this totalitarian regime. The TV series continued our journey with Offred and the injustices we’re forced to stomach. The show has prepared you, reignited you, made you ready for The Testaments – so be prepared to take this gorgeous hardcover with you everywhere.

What are you truly willing to give up in order to survive? These testimonies beautifully interweave the questions and answers arising from The Handmaid’s Tale and present the reader with new moral quandaries. The Testaments is masterful. Perhaps the most unconventional sequel I’ve ever encountered, but I expected no less. Being in the hands of Margaret Atwood once again was an awakening I didn’t know I needed

Reacties op: A chilling invitation no Atwood fan can resist 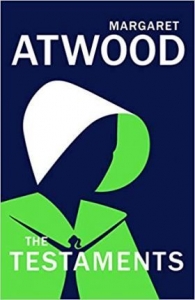