Summary:
Avery Grambs has a difficult life ahead and she struggles to be able to pay for the things she needs. One day, she receives a strange letter, telling her she needs to fly to Hawthorne House. When she and her sister get there, they find out she is entitled to the biggest part of Hawthorne’s inheritance. There is, however, one condition: she needs to live in Hawthorne House for at least a year. While she’s there, the Hawthorne brothers make her suffer and struggle even more, this time just not for money. They are all very confused, including Avery, as to why her? By solving games and puzzles, they might be able to find out…

Writing style & form:
Jennifer Barnes has a nice writing style. She does not use grammatical structures that are too difficult, but also not too easy, so it’s not written in a very childish way. It was a nice and enjoyable read for the summer!

Plot:
I really liked the plot of the book, but I would’ve liked more information and details on the characters. The brothers didn’t have much features that distinguished them from each other and Max didn’t seem that useful for the plot to me. I also think that a bit more information on grandpa Hawthorne and his games was necessary, especially in the beginning of the book, to properly follow the plot. Only later on, we find out that he was always playing games and making puzzles, whereas that would’ve been useful information earlier on in the plot.
However, I really loved the mysteries and the puzzles in the plot and I also think that the plot was unpredictable, as opposed to many plots nowadays, so that was very nice!

Conclusion:
This book is a really nice and easy read! The use of language is not too difficult or too easy, which makes it comforting to read and the unpredictability of the plot made that you will want to keep on reading until you’ve finished the book. The games and puzzles were well thought of and the tension between the characters made the story more eventful and even tense at times! I would have liked more information on the characters and a bit more background information about the puzzles and games, but I am patiently awaiting the second book, hopefully my wishes are granted there! 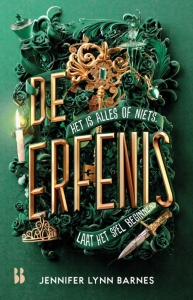