All children are special, and each child is different, especially when it comes to your own. But Max, the protagonist in Abigail’s Tartellin’s, thought-provoking second novel Golden Boy is more special and more different than most.

To those who think they know him, sixteen-year-old Max is good in the classroom and good on the football pitch. He has a wide circle of friends and is liked by the girls. Add in two loving and successful parents (both lawyers) and a younger brother, Daniel, and he’s got a perfect life. But Max and his parents have kept the Golden Boy’s true identity a secret from everyone. Max is intersex, he is neither a boy nor a girl. However, as a result of the violent betrayal of a lifelong friend (aptly named Hunter) and the pressure his Father faces when running for parliament, the family is forced into finally dealing with who Max really is.
When Max was ‘revealed’ early on in the book, I was tempted to head off to Wikipedia to do some research on the subject of ‘intersex’, or as I ignorantly used to term it when younger,
‘hermaphrodite’. But I didn’t need to as all aspects of ‘intersex’ and how it affects children as they develop were described in detail throughout. There were times when it did feel like research and fell outside the narrative, but in general, the details gave weight to the story, for example when Max and his girlfriend Sylvie.
As a reader, you are left in no doubt how each character is feeling as Tarttelin's descriptions are forensic. But as the story progressed I felt the urgency of the plot to unfold, which was the novel’s strength, was at times stalled by the extent of such detail – I fought with the temptation to skim over these parts.

Tarttelin covers many themes. Obviously, gender and sexuality, but also how identity more widely informs how we see each other, in particular when growing up. This is also the case in the role each parent plays; both have high powered jobs, but the mother also takes on the more traditional role of housewife. It is here where the classic theme of secrets and lies amongst family members is played out, with each having their own agenda they perceive to be for the good of all.

If a book with literary ambition should both inform and entertain, as well as make you see the world in a different way, if only slightly, then Tarttelin has certainly achieved that. She has taken on a topic which, besides Jeffrey Eugenides book Middlesex, has had little attention paid to it in fiction. But it confirmed my belief that although we have more information than ever about how other people live their lives, it doesn’t mean that growing up is any easier or that people are any more empathetic. On reading Golden Boy you would hope such attitudes can change; that we can see the difference not as something to ridicule or discriminate against but rather as something quite natural. After all, people are all different, they are all special, aren’t they? 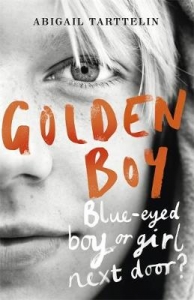