Milkman” tells the story of “Middle Sister,” who stands out in her neighborhood for her habit of reading while walking (“Are you saying it’s okay for him to go around with Semtex but not okay for me to read ‘Jane Eyre’ in public?’” she asks at one point).
The “Milkman” of the title is an apparent paramilitary, who stalks Middle Sister, insinuates he’ll murder her “Maybe-Boyfriend” and talks himself into her life. The book is told from the Middle Sister’s perspective, most of which are the thoughts rushing through her head as events force themselves upon her.
The book is filled with an oppressive air, giving a distinct impression of what parts of Belfast were like in the ’70s but also a surprising amount of humor.
There are moments when I had to read it out loud, just for the pleasure of it, the way it sounds,”
Milkman has its own energy, its own voice. Although the novel is set in Northern Ireland during the 1970s, it prompts thoughts of other regimes and their impact: Stalinist Russia, the Taliban. Medieval witchhunts, the Skripal poisoning and the #MeToo movement also sprang to mind while reading it. Despite the surreality, everything about this novel rings true.

The will of the community initially appears hegemonic and invincible, but the narrator’s fellow “beyond-the-pales”, although disparate, are beacons of hope. There is the International Couple who packed up to achieve global fame as champion ballroom dancers, inspiring the local children to emulate them. There are the “issue women”, a nascent feminist group. There is the “real milkman” – an actual milkman who would not stand for having weapons buried in his garden, nor for kneecappings, floggings and kangaroo courts, thus making himself a pariah.

What starts out as a study of how things go wrong becomes a study in how things go right, and the green shoots are not the work of the paramilitaries. The narrator of Milkman disrupts the status quo not through being political, heroic or violently opposed, but because she is original, funny, disarmingly oblique and unique: different. The same can be said of this book.
There is a pulsating menace at the heart of the book, of which the title character is an uncannily indeterminate avatar, but also a deep sadness at the human cost of conflict. There is no shortage of physical violence, certainly—bombings, decapitations, shootings, stabbings, blindings, beatings, so forth—but what remains, after the final page, are the ways in which the nameless citizens of Burns’ nameless city prevent themselves from ever really living life, out of a certainty that what is loved will be ripped away and must therefore never be embraced. I lost count of the number of characters who have knowingly wound up with the wrong romantic partner as a means of forestalling this kind of loss. For similar reasons, there is an unofficial proscription against the appreciation of art, or the taking of pleasure in food, or in the world’s beauty. Sunsets are a central motif in the book, not for reasons of romance or aestheticism, but for something like their opposite: because the conspicuous enjoyment, or even acknowledgement, of such things opens one up to the world in a way that feels dangerous.


Here is Burns’ narrator, for instance, channeling the Greek chorus of the community, in its conviction that to live fully is to court the possibility of loss: “What if we accept these points of light, their translucence, their brightness; what if we let ourselves enjoy this, stop fearing it, get used to it; what if we come to believe in it, to expect it, to be impressed upon by it; what if we take hope and forgo our ancient heritage and instead, and infused, begin to entrain with it, with ourselves then to radiate it; what if we do that, get educated up to that, and then, just like that, the light goes off or is snatched away?” As with much of the rest of the book, I’m sure Burns could have put this more snappily, but I am grateful that she did not.

One of Milkman’s most affecting scenes involves the students of a night class in French turning their backs to the sunset, in a manner that is “instinctive and protective,” as their teacher insists that they turn to look at it. The teacher sees a sky ablaze with a lurid explosion of color, where the students see only blue, which they know for a fact to be one of only two possible colors of the sky (the other being black). It is, in its strange and oblique way, as powerful an illustration of the effect of violence and oppression on the life of a community as I have read. For all the darkness of the world it illuminates, Milkman is as strange and variegated and brilliant as a northern sunset. You just have to turn your face toward it, and give it your full attention.

Milkman is a book about what happens when something—a person, a cause, or a community—demands your entire soul, and demands it not from a position of power but from the desperate edge of survival. 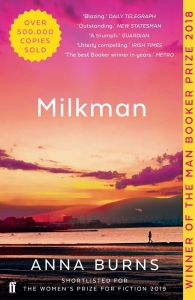