I just finished this (mostly) entertaining mystery novel by Joel Dicker...
Imagine you’re doing a jig-saw puzzle. Do you do jig-saws? I enjoy the challenge but they eat up so much time that I rarely allow myself the pleasure, except around Christmas. This jig-saw, if you can imagine, is constructed in such a way that there are seemingly multiple possible solutions, but each time you get close to finishing one you find there are a few key pieces that don’t fit, so it’s the wrong solution, and you have to start again...A bit frustrating, no? So you can understand how I felt about this book. Like the jig-saw I’ve described, it’s cleverly constructed to lead the reader to multiple possible solutions—but each time you get there, you’re told it’s the wrong one. Okay, a normal strategy for the mystery-thriller writer, but Dicker carries it, more cleverly than most, to the extreme. So for me this was a terrific read for most of the way through, but when I reached the end, when he showed me a whole new picture by putting all the pieces back together for me, I felt... not cheated, exactly. But manipulated by his cleverness.

Don’t get me wrong. I enjoyed the read. It’s compelling, challenging, sometimes even funny. The characters are finely drawn and for the most part believable. The protagonist is a writer suffering from a bad case of writer’s block, whose master teacher, life coach and inspiration is the other major character—the illustrious Harry Quebert; the others are the denizens of the small New Hampshire town (think “Our Town”) which is shocked by the disappearance and, we eventually discover, the murder of a fifteen-year-old high school girl: the owner of the diner where she worked, the local pastor and his family, the cops, the wealthy businessman from a nearby town and his facially-mutilated retainer (think Frankenstein!) The story is a complex (and extremely cleverly!) interwoven mix of texts, interviews and memories that span a more-than thirty year period in time-warp fashion and it keeps you, as they say of movies, “on the edge of your seat.”All this was good—though I started to sense some credibility problems early on. Was the love affair at the center of the story truly believable? Would the lovers really have behaved like this? And would a “great writer” be capable of such sloppy sentimentality in his prose? Also, for this reader, the hyperbole that idolizes what purports to be the greatest literary figure of the past fifty years rings a little false. But so what? A little exaggeration is a part of the game. But it was the accumulation of all these little problems along the way that somehow set me up for the big credibility problem at the end: after all the deception and all the false narratives and dead ends, are we willing to finally accept the way that every forgotten loose end now locks so neatly into place, with the impeccable logic of the completed jig-saw puzzle? 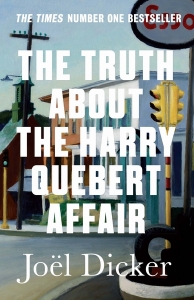