Never Let Me Go is outstanding in almost every way, a riveting and thought-provoking read from beginning to end that works as coming-of-age, as dystopian science fiction, and as dread-inducing horror. It also works beautifully as a literary novel.
What do I define as literary? In the research I’ve done into literary fiction, I have found a few common elements, but I would say first and foremost the author of a literary novel pays more attention to character development than plot. The novel will often have a clear narrative, but the focus is not chapter cliffhangers or scenes that serve no other purpose than to get the reader to the next. Author Ishiguro tells a fascinating tale in this novel, but he never rushes the plot, and always takes time to develop his three main characters. He writes early on.
Another element of I loved about Never Let Me Go was its subtle use of horror and suspense. Some may argue that it’s not a horror novel. Coming-of-age, sure, and science fiction, okay, but horror? Although I agree that Never Let Me Go is not horror the way many Stephen King books are obviously horror, this is absolutely a novel about a horrific circumstance that can’t be avoided no matter how much the main characters want to, and Ishiguro provides enough suspense and terrifying images to suggest that there’s something dreadfully frightening about this world. Sometimes it’s just in the small details, like this Besides the literary and horror elements, the novel features fantastic use of setting and dialogue. One of my biggest weaknesses as a writer is in capturing setting, and Ishiguro does it well right off the top.
Lastly, the title of the novel is given great emotional weight in one of my favorite scenes, when a young Kathy dances to a song called, “Never Let Me Go.” Ishiguro writes,
" By then, of course, we all knew something I hadn’t known back then, which was that none of us could have babies. It’s just possible I’d somehow picked up the idea when I was younger without fully registering it, and that’s why I heard what I did when I listened to that song."

Never Let Me Go tells of a society where clones are educated and brought up solely to provide their vital organs for regular people in the world. The novel is told in first person, past tense, double-I from the perspective of a woman named Kathy, one of the clones who is reflecting on her life story. The book takes place over three parts. In the first part, Kathy and her two best friends Ruth and Tommy live in an idyllic location in England called

Young Kathy has no idea she can’t have babies and will not get to live the long life she wants, and so there’s an emotional power to this scene that really comes through. 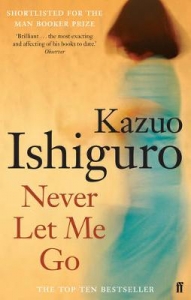