'Three dark crowns' is a story about a realm in which it is tradition that the queen abandons her triplet at birh. Of these three princesses (Kendare Blake calls them queens, but they aren't yet) only one can become the queen by killing the other two. So it is survival of the fittest, really. In this imagenary world, the author portrays several groups in which people are divided, based on the magical gifts they have. Some examples are: poisoners, war gifts, sight, giftless, naturalists and elementalists. This fantasy world she creates is wonderful, however the atmosphere she gives it is the worst. It just feels nasty and lugubrious while reading. Not because the sisters are trying to kill each other constantly. More due to the indoctrination and pressure around these sisters, which results in the fact that they do not fear death or pain in any way. Maybe to create characters like that was Blake's goal, but this makes them seem unrealistic and surreal even. Their reactions don't make any sense whatsoever.

There is this one time, when one of the sisters is nailed to a tree by a knife through her hand. Instead of thinking how f****** much that hurts or instead of crying, she starts wondering why the one who threw the knife would do that. You can be indoctrinated day and night, but you would still feel a sharp knife cutting right through your hand.

Even though I don't quite like the book, I do know some people who do. They are attracted to the fantasy world Blake creates in her novel. The groups she describes are amazing and worked out in detail. Therefore this is a must-read for people who like stories such as 'The Hunger Games' and 'Divergent'. I must add: I have not read these books and they are not books of my choice either. So if you disagree with me on that, you will probably love 'Three dark crowns' .

Reacties op: It's a queen's world 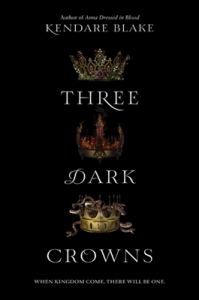